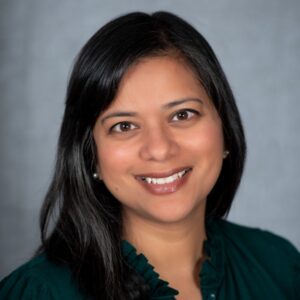 Shabnum joined the Toronto Transit Commission (TTC) in 2020 as Head, Corporate Communications. In that role, Shabnum oversees a diverse team that develops and implements all corporate communication initiatives for the transit agency with a focus on ensuring a clear alignment for internal and external audiences. Shabnum also serves as the Vice-President of Communications and Marketing for the Toronto and Region Chapter of the Conference of Minority Transportation Officials (COMTO).

Prior to joining the TTC, Shabnum worked in a variety of public affairs and communications roles, including as a senior advisor at Queen’s Park where she advised several Cabinet Ministers on a variety of initiatives including spearheading over ten pieces of legislation. Shabnum began her career as a lawyer, working at one of Canada’s largest law firms.

Shabnum has a Bachelor of Commerce from the University of Alberta, a Juris Doctor from the University of Toronto’s Faculty of Law, a Masters in Public Policy, Administration and Law from York University, and Masters in Public Health from John Hopkins Bloomberg School of Public Health. In 2022 she won the TTC’s inaugural Diversity Award and was named Employee of Year for the organization.